The emerging consensus of research shows a growing percentage of young adults are not connected with any religion, although many younger Americans express an interest in spirituality. 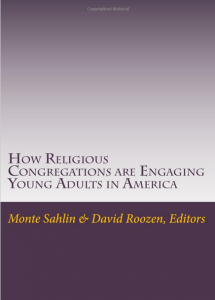 What is the involvement of young adults in local congregations of all faiths across the United States? And, how are faith communities with a significant proportion of young adults distinctive?

We have recently published a book, How Religious Congregations Are Engaging Young Adults in America, that tackles this issue with fact, suggestions and examples from congregations that have been successful in attracting young adults.

Order this book from Amazon in print or as a Kindle e-book.

Across all faiths, a total of only 16% of all congregations had significant young adult (18 to 34 years of age) involvement.

For the resources below, a congregation is considered to have significant young adult participation if 21% or more of its participants were 18 to 34 years of age.

These resources explore patterns and practices of churches and other congregations with significant young adult involvement.

The following ten case studies of churches and other faith communities with significant young adult involvement were chosen to capture the diversity of American religious congregations today. They vary in size from a group as small as 50 to a megachurch and are from multiple faith traditions. In each case, the case study involved one or more on-site visits with the local group and interviews with key leaders and some of the young adult participants, as well as gleaning information from working documents and websites.

These case studies include:

It is hoped that careful reading and rigorous reflection on these case studies will lead to not only a deeper understanding of how some congregations are effectively engaging young adults, but also the identification of best practices to reach this distinctive demographic.